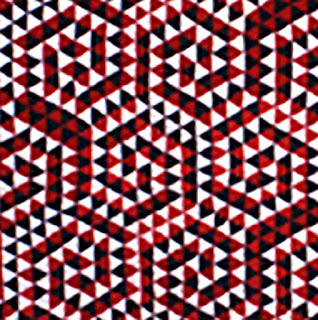 An interesting red, white and blue quilt
found in the Massachusetts project. 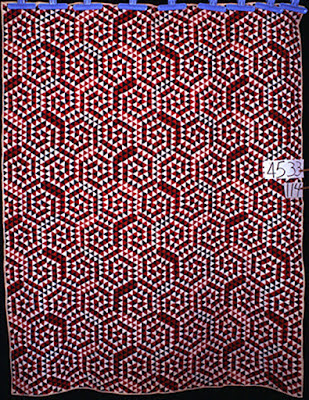 61" x 78"
Family attributed it to Perry M Lenterman of Chicago and thought it might have been made in 1894. It's machine pieced and machine quilted and someone counted 9,750 solid color triangles---all the same shape, a tessellation.In 1877, 22 year-old Perry Moss Lanterman married Ella Saphome Butler in Chicago, and this is likely the quiltmaking Perry whose name is variously spelled Landerman, Lenterman and Lanterman.  He was a New Yorker, born in 1856. Ella was born in Massachusetts, probably the connection to a Massachusetts relative who inherited the quilt.
Ella and Perry had four children between 1879 and 1894.  Ella died in 1896 leaving children from two to teenagers. Perry remarried in 1899 to Anna Johnson, about 20 years younger. She was born in Norway. 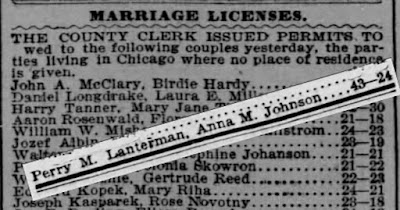 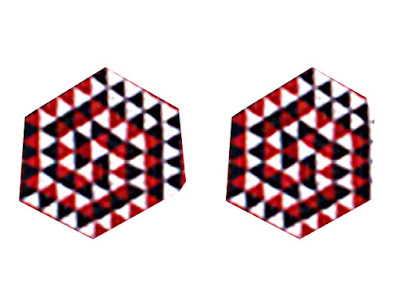 Well, I can't figure out the repeat. It's not an equilateral hexagon although those look like equilateral triangles.
What kind of a man makes a quilt like this?

In 1880 census taker Harriet Van Orsdel recorded Perry and Ella living at 724 Van Buren Street with their eldest son. (It's under the enormous freeway interchange downtown now.) Perry is listed as a machinist and that is consistent throughout his life.

He ran the Chicago Knife Works at 179 S Clinton. This
ad tells us the firm was established in 1863 when Perry was
about 7. He came with his parents to Chicago, so the business
might have been begun by his father Benjamin Franklin Lanterman.
One can imagine a machinist/mechanic figuring out a tessellation to keep himself entertained. And one wonders if he made other quilts. He lived from 1856 to 1925.
Here's his gravesite in Chicago:
https://www.findagrave.com/memorial/222463289/perry-moss-lanterman

And the file on his quilt at the Quilt Index:

Posted by Barbara Brackman at 6:00 AM