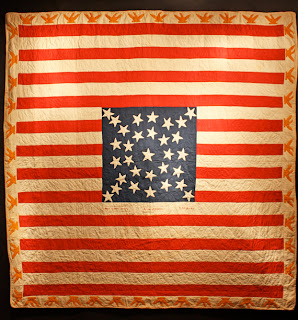 This patriotic quilt seems to be the hit of the Winter Antiques Show in New York this week. It's being shown by Stephen Score Antiques from Boston. Ken Johnson, reviewing the Show in Friday's New York Times had this to say:

"Some works have fascinating back stories. Research suggests that a quilt at Stephen Score, with a square, centered field of white stars on blue, surrounded by red and white stripes, with a border of abstracted yellow eagles---one of which is missing in the lower right corner---was created in 1880 as a past-abolitionist reminder that the project of achieving racial equality in America was not yet complete."

See the review by clicking here:

I haven't seen the quilt, but it looks like the eagle has been removed. From the photograph the quilt looks to be late-19th century and probably a Civil War memorial quilt, one of a good body of such quilts---more of these in my next post.

Here's a description of the quilt from the blog GoodbonesGreatpieces.


"exquisite Freedom Quilt, hand-pieced, appliqued and quilted. From about 1880. Hand embroidered in red below the blue field of stars: “Hope of our country” “The Star of Freedom: “M.W. L to C.M.L” These words are attributed to the American abolitionist Harriet Beecher Stowe. Made by a member of the Lewis Family of Boston, MA, and Saint Louis, MO. "

This story seems to be a combination of two common myths in interpreting antique quilts. One is that the quilter set up a repeat and then deliberately broke the pattern as a sign that she did not assume perfection.
The other myth is that quilts were used as codes or maps to freedom during the time of the Underground Railroad when abolitionists assisted escaped slaves.

Here we have a "deliberate mistake" as a "post-abolitionist code."

It's an opportunity to remind everyone that historians efforts to debunk these myths of interpretation can only go so far. Myths endure. Myths endure because they tell us about who we want to be. And now we have a new one.

It's in the New York Times.

And in an update 3 hours later: Today's New York Times blog post at the "Opinionator Blogs Disunion" has a very well written argument against the exact same kind of "Research suggests that...." in the above copy in the newspaper article. My writing teacher told me never to point out irony. So I won't. Read this:
http://opinionator.blogs.nytimes.com/2011/01/21/teaching-civil-war-history-2-0/

See an earlier post about the so-called "deliberate mistake" by clicking here.
http://barbarabrackman.blogspot.com/2010/08/hoo-doo-humility-and-deliberate.html

Read a paper I gave at the American Quilt Study Group several years ago about interpreting symbolism in antique quilts here:
http://faculty.culver.org/~foleyd/Teacher_files/craftingfreedom/rockyroad.pdf
Posted by Barbara Brackman at 12:09 PM