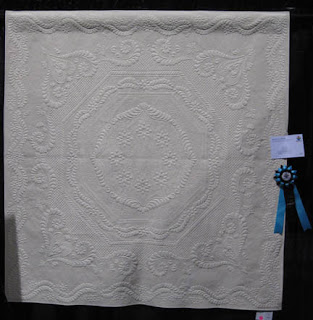 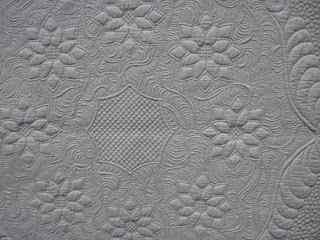 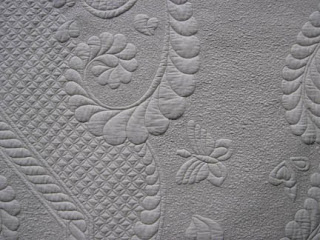 The pictures are a little gray but the masterful quilting shows up.
Whitework is a traditional name for a style of needlework that sometimes features what we call trapunto quilting. Trapunto seems to be a 20th-century name for what historians call stuffed work or corded quilting. I don't think Terri adds stuffing to the motifs. She contrasts dense filler quilting with the unquilted design areas to create the pattern. 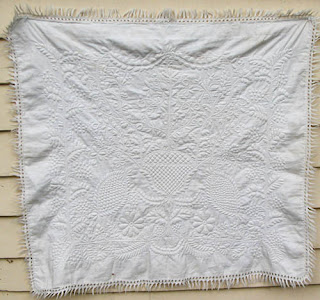 Here's a small whitework piece from the early 19th century that's stuffed and corded but not quilted.
The International Quilt Study Center and Museum in Lincoln, Nebraska is planning an exhibit and a symposium on the topic of whitework. The show Marseille: White Corded Quilting will be up from November 13 through May 8, 2011. The symposium Quilted and Corded Whitework: A Closer Look will be on April 1, 2011.
Speakers will include experts Linda Baumgarten, curator of textiles at Colonial Williamsburg and Kathryn Berenson, author of the Quilts of Provence and a new book on French whitework.
Click here for more information:
http://www.quiltstudy.org/
Click here to see one of the French whitework quilts from IQSC's Berenson collection.
http://www.quiltstudy.org/includes/photos/quilt_database/large/2005_018_0012.jpg
Posted by Barbara Brackman at 6:43 AM