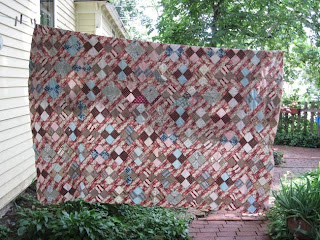 This pre-Civil-War top was the inspiration for colors and prints in my Civil War Homefront collection for Moda. It had been a comforter cover; was worn into holes; taken apart and then a friend bought it to use some intact patches for repairs. It looks rather pastel in this summer shot in my yard because the light is shining through it. The photo of the good parts below shows the color and the prints better. 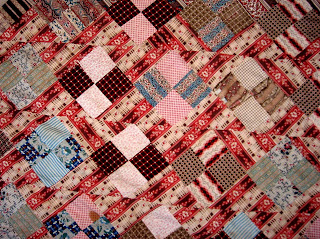 It's rather chaotic, a look I love about early quilts where the patchwork pattern and the fabric patterns compete for your eye. I always love a good fight.

You can see it's a four patch set in strips with setting triangles of the large stripes that were so popular for women's dresses in the 1840s and '50s. The strips are offset so the large triangles form a zigzag, which you can hardly notice because the random stripes are screaming, "Look at me!"

I decided to interpret this top when my Civil War Homefront fabric arrived. I took a precut package of 2-1/2" Jellyrolls and gave my friends in my sewing group 2 or 3 strips each and told them, since it was my birthday and I got to choose a project, that I would like them to make as many nine-patches as they could out of the strips and not to worry about contrast.

Then I set the nine-patches with stripes in a fashion similar to the original top. 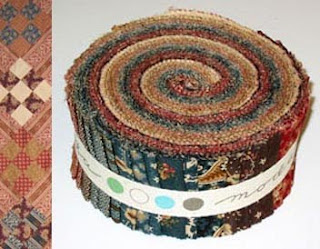 I thought about setting the strips right next to each other, but decided that on the chaos-to-calm scale I was of a less chaotic frame of mind than the original crazy quilter. I didn't even try to offset them to create a zigzag. That might have hurt. 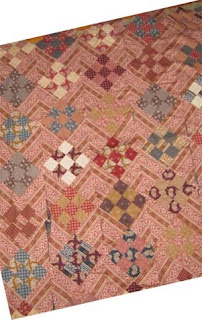 This was not working. Then I recalled this antique quilt, which I found on an online auction. It had been in the back of my mind and I am glad I had the picture. 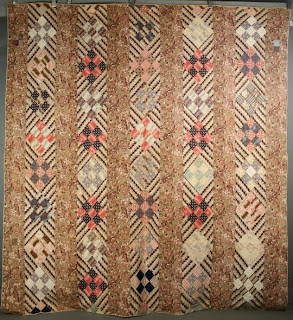 Here's a cobbled together shot of the top, which is going to the quilter this week. Five pieced strips, six unpieced paisleys. Blue triangles at the top and bottom. 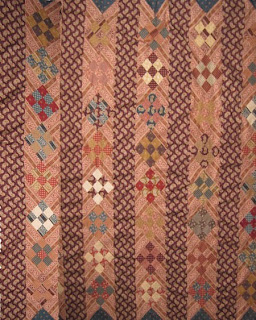 On the sliding scale of chaos-to-calm it fits me fine. Those randomly cut stripes may be too chaotic for you. You could fussy cut them. I also had trouble sewing them all in the same direction, but that's part of the chaos that appeals to me.

I'm posting a free pattern on my webpage. Click here to see it:

Posted by Barbara Brackman at 6:17 AM