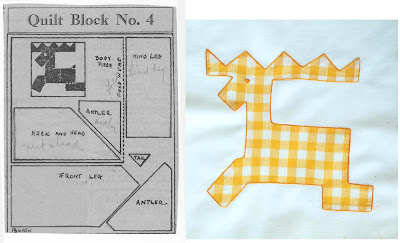 Joyce in Washington State sent a story with a pattern question:

"My nephew recently handed me a very old primitive box with a sliding lid. He had cleaned out my sister's house after her death and found this box with a note inside from my grandmother: 'For Joyce'.

Inside were some completed and some unfinished quilt blocks which I remembered from age three in 1933. I had loved this project which my mother was working on for me. She died when I was six, and everything disappeared. Occasionally through my life I have wondered about that quilt and was blown away when I opened the box. Many of the paper patterns were there also, so I was able to identify her source. Unfortunately all my searching has not turned up the pattern. I would so love to find it."

Because she had some paper patterns she knew the source was the newspaper column in the Seattle Post-Intelligencer in the fall of 1933 under the name Prudence Penny's Patchwork Zoo. Each pattern is signed Buren. 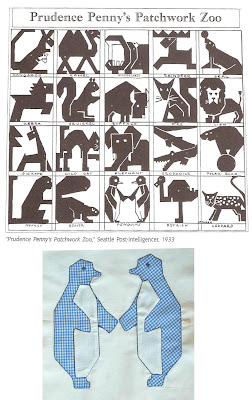 I don't have all the patterns but I did have an overview sketch. The first book I wrote Creature Comforts was based on the Patchwork Zoo. Here's a quilt my co-author Marie Shirer made from some of the patterns. We adapted animals from the original sketch and used the same idea to draw more. Marie and I didn't think to use paper piecing in that book (nobody had invented it yet) but they'd all make great paper-pieced designs. 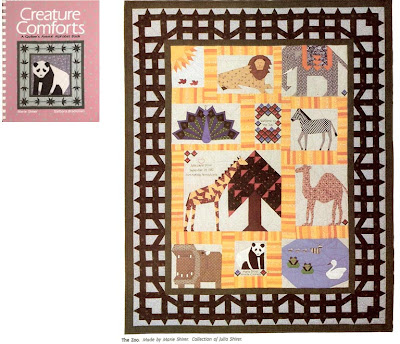 M. Buren was probably the newspaper's artist. Prudence Penny's real name was Bernice Redington, who edited the women's page at the P-I. She meant these designs to be a strange combination of piecing and applique, but she apparently didn't know much about stitching anything so complex. The Zoo patterns are not the easiest to use. Joyce's mother appliqued each as a simple shape in a gingham check, a smart solution.

Our book is way out of print, but it's inexpensive. See more here: