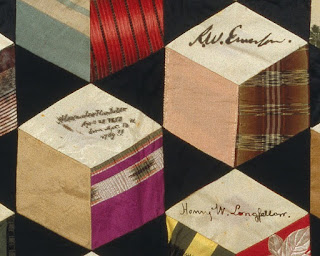 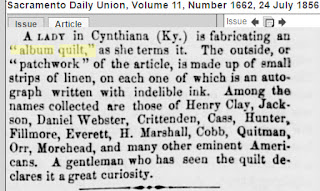 At the height of the album quilt fashion in 1856 the Sacramento Union copied an article about a quilt in progress in Cynthiana, Kentucky. Names inked on the "strips of linen: Henry Clay, Jackson, Daniel Webster...and many other eminent Americans. A gentleman who has seen the quilt declares it a great curiosity."

The first three politicians mentioned in the article were long dead by 1856 so I don't know what to make of this news article but it does describe a subcategory of signature quilt style, the celebrity quilt.
Two impressive surviving examples of celebrity-signed quilts survive. Both are silk and date to about 1860. 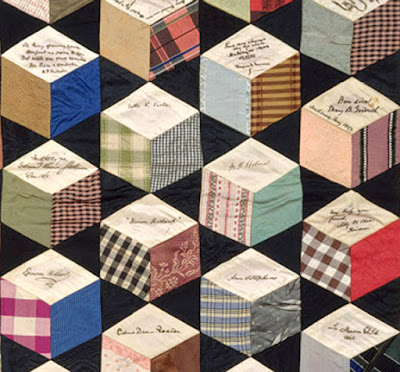 Adeline Harris Sear's Tumbling Blocks.
In the detail above L. Maria Child's 1863 signature is at the lower right. 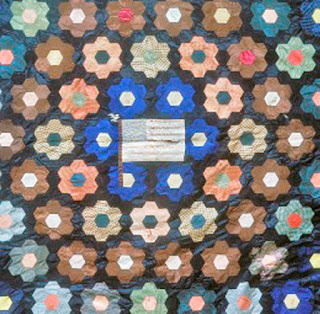 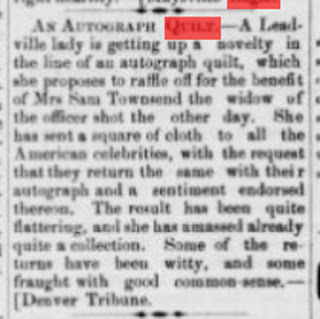 "A Leadville lady is getting up a novelty in the line of an autograph quilt....She has sent a square of cloth to all the American celebrities, with the request that they return the same with their autograph and a sentiment endorsed therein. The result has been flattering...."

Celebrity quilt is not a period name. It's one I made up.

See Mary Stori's celebrities of the quilt world project:
http://marystori.blogspot.com/2014/05/blood-sweat-signatures-quilt-celebrity.html
Posted by Barbara Brackman at 6:00 AM