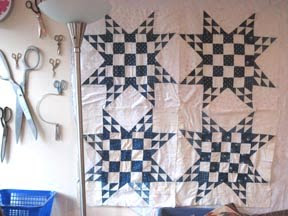 Julie in Tennessee sent me blocks removed from an old comforter cover. She'd received them from a friend who was a member of the Shields family of Cades Cove, Tennessee. The pattern is one I haven't seen.
The blocks look to be from 1890-1920 when indigo prints were relatively inexpensive and very popular with quiltmakers. They show typical indigo coloring with a dyed blue background and white figures, style dictated by indigo's chemistry. Indigo will not color if it is exposed to oxygen, so simply applying indigo to a wood block or copper plate does not work because the dye binds with the oxygen in the air. 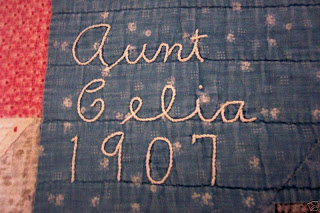 Here's a date-inscribed quilt from an online auction with indigo blue as the ground and white figures in the print. It's a typical early 20th-century factory printed indigo.

Printers traditionally print white figures on indigo grounds in a reserve or resist process (also called batik) by applying wax or a resist paste in a pattern on the fabric and then dipping it in the indigo dye vat. When the paste is removed a white on blue design appears. Another technique developed about 1800 involves dyeing the fabric blue in the indigo vat and then printing a discharge paste to bleach out the figures. The prints in the Cades Cove blocks and Aunt Celia's quilt are probably done in a sophisticated variation of the discharge technique (although the pattern design is rather unsophisticated).
The indigo resist process has been used by artisans all over the world. Pennsylvania historian Trish Herr has been collecting early indigo resist prints from the Germanic people there. These are hand printed rather than factory printed. 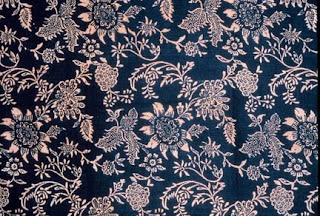 This quilt is called Japanese Coins, made by Georgann Eglinski from Japanese fabrics, 2009. 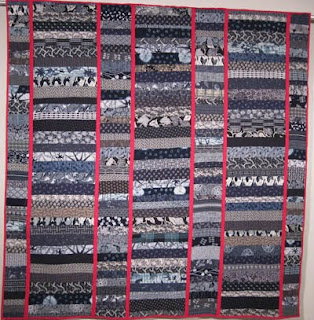 Printers figured out ways to reverse the figure/ground appearance in indigos. The earliest technique was the labor-intensive process of applying resist paste to the background and leaving the figures to absorb the dye. These indigo resist prints are sometimes called China blue prints because they look like a piece of porcelain. 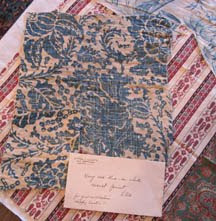 A sofa upholstered in indigo-resist reproduction from Ikea

To see more reproductions do a websearch for the words: fabric indigo resist.

And see how indigo yarn is dyed in a recent dyeing workshop in the Navajo nation by clicking here:

Posted by Barbara Brackman at 7:26 AM